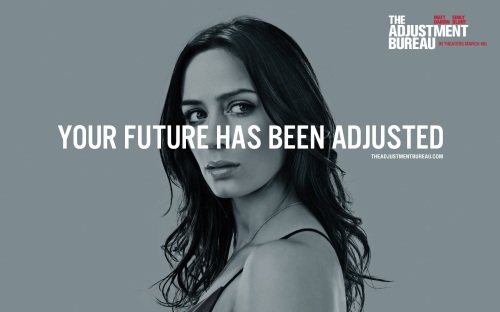 Is the new Matt Damon vehicle The Adjustment Bureau as farcical as its title? Mike Richardson reports…

It’s a lazy reviewer who likens a film to two other films, and it’s an even lazier advertiser who does the same. With The Adjustment Bureau (aka “Bourne meets Inception”) the sin of laziness is further compounded by being downright misleading. The only aspects of the aforementioned films that have a relevance to the Adjustment Bureau are that a) Matt (Jason Bourne) Damon himself is the lead protagonist and b) the raised paving stone seen in the trailer, looks like a mini version of the Parisian walkway folding of Inception, and that’s it.

The Adjustment Bureau is taken from a Philip K Dick short story (Adjustment Team first published in 1954) and deals with issues of fate and free will. The question it asks of the audience is: “what if your fate was pre-ordained and a team of supernatural administrators nudged you towards the destiny that they have decided is yours?” It then throws into the mix: “what if the love of your life wasn’t part of their plan for you? What could you do and what should you do?”

The film opens with Damon’s David Norris (a US politician) chasing a seat on the Senate. He loses the election and then just so happens to meet the girl of his dreams, ballerina Elise Sellas (Britain’s latest rose: Emily Blunt). Not only does she steal his heart but also inspires him to give a sincere defeat speech. The speech she inspires from David is the first step of his pre-ordained fate that has been designed by the slightly sinister, hat wearing Adjustment Bureau, however ever seeing her again is NOT part of their plan for him.

Due to an accident, or genuine fate, David meets Elise again, gets to see the Bureau at work (changing the thoughts of one of his business colleagues – for a greater good of course). Having seen behind the curtain David is told of the Bureau’s existence and their power, then bluntly ordered to get with their plan, and never see Elise again (or else). The implication is that there is something otherworldly about the Bureau’s employees. They can bend geography (opening doors to other locations) and appear to be adhering to the grand plan of an omnipotent “chairman”.

The first act of the film nicely sets up the existence of the Bureau, the slightly sinister power they wield and the fact that events in life are nudged in a certain direction by these bureaucrats in hats. The second act is where David and Elise meet again and where the choice is laid before David: love or success; follow your heart or your head and as an against-the-odds love story it works very well. It is explained to David in no uncertain terms, by a cucumber cool Terrance Stamp, that the Bureau expect him and are arranging for him to be president one day but not if he stays with Elise. When that doesn’t prove enough of an incentive he is told that if they stay together it will kill her dreams, as well as his own. She would go from being the world renowned dancer / choreographer that she deserves to be to teaching ballet to six year olds. A fearful threat indeed.

Having set up an existential battle of wills in which David must deal with the ramifications of his choices the film turns into a documentary about a man running around in a hat.  The final act suffers from a repeated reliance on sprinting and chasing and pushing and opening doors to unexpected locations (the Bureau’s primary mode of transportation). In the same way in which the characters ultimately escape their predestined fate for a different (happier) destiny the film “escapes” its fate of being a mind-pushing and stimulating thriller.