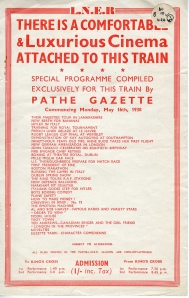 A document held at the National Archives in Kew (pictured left) has been used to virtually recreate the 1930s L.N.E.R. Pathe Saloon Car programme online.

In the age of Art Deco, just before war was declared, North Eastern Railway trains offered passengers the opportunity to watch films on their journey. A kind of in-flight entertainment for the 1930s, if you will. Given the historical context of the time there were, amongst other articles, some extremely telling newsreel reports from pre-war Britain included in the programme. Watching it, it’s easy to see why many of the biggest names in filmmaking have used the 1930s era as inspiration for their pictures.

The National Archives has used the document to reconstruct the entire programme using a workspace on Pathe’s website. This means you can watch all of the films in order as they would have been viewed by the people of Britain in 1938.

In issue 3 of New Empress Magazine, released in September, we are including a detailed, commemorative article celebrating the L.N.E.R. Pathe Saloon Car.

This entry was posted in News. Bookmark the permalink.