In Review: You Instead

Although You Instead does steal its premise from an episode of Press Gang – I’ll never understand why Lynda and Spike just couldn’t work things out – there are worse starting points for a film that earns itself a deserved place in the quirky-but-likeable rom-com subgenre. Filmed at the music festival T in the Park last year, You Instead sees Luke Treadaway (Attack the Block) and Natalia Tena (Harry Potter and the Deathly Hallows Parts I and II) handcuffed together by a crazyman and reluctantly fall in love.

There is a lot to like about this film. Especially given the ridiculous number of formulaic, star-driven romantic comedies that are systematically bombing at the box office. Luke Treadaway oozes charisma as the rock star front man, Adam, showing incredible versatility after the science-obsessed drug addict he played in Attack the Block. Similarly Tena, lead singer of an all girl rock act, shows she has completely grown up and is ready for more adult projects after younger stints  in About a Boy and The Harry Potter franchise.  A special mention should also go to Treadaway’s hilariously dork-chic band mate: Tyko (Mathew Baynton) who is given a lot of the more memorable lines and drives what little sub-plot there is.

In addition to some very watchable acting turns You Instead is lovingly shot. It effortlessly captures the unwashed blurriness of music festivals; the other worldliness and the constant beat humming somewhere in the distance. The niggles I have with this film – Luke Treadaway: does he need to be American? Especially when he can’t really do the accent – don’t register enough with the viewer to detract from the fun and in terms of the rom-com genre it definitely delivers in an above-average fashion on every level: narrative, acting, score, script and composition. Anyone who doesn’t sing along (if only in their head) during the Tainted Love mash-up is without a soul. Plain and simple.

With You Instead now on general release hearts will be warmed, worlds will be rocked and women all over the world will realise that there are many worse things in life than being handcuffed to Luke Treadaway. An important lesson at any age, I would think. 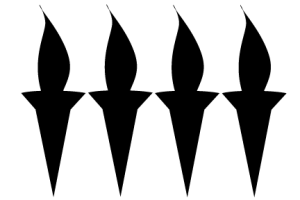 Helen has awarded You Instead four Torches of Truth

This entry was posted in News and tagged luke treadaway, natalia tena, romantic comedy, you instead. Bookmark the permalink.

One response to “In Review: You Instead”