Posted on October 10, 2011 by newempressmagazine | 2 Comments 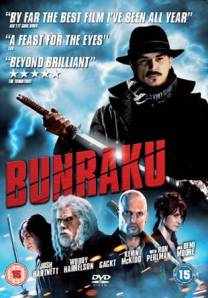 To celebrate the release of Bunraku on DVD and Blu-ray we’re giving away 3 Bunraku Blu-rays to 3 lucky readers!

With a Budget of $25 million and loaded with an all star cast including Josh Hartnett (Black Hawk Down, 30 Days of Night), Woody Harrelson (Natural Born Killers, Zombieland), Demi Moore (A Few Good Men, GI Jane) and Ron Perlman (Hellboy, City of the Lost Children), Bunraku is an all action fantasy western that blends Sin City with Kung Fu Hustle.

A mysterious drifter (Hartnett) and an ardent young Japanese warrior Yoshi, played by Gackt in his international film debut, both arrive in a town that is terrorized by outrageous and virulent criminals. Each is obsessed with his separate mission, and guided by the wisdom of The Bartender (Harrelson) at the Horseless Horseman Saloon, the two eventually join forces to bring down the corrupt and contemptuous reign of Nicola (Perlman), the awesomely evil “woodcutter” and his lady Alexandra (Moore), a femme fatale with a secret past.

This entry was posted in About, News and tagged blu-ray, bunraku, competitions. Bookmark the permalink.

2 responses to “Win Bunraku on Blu-ray!”