Win The Burma Conspiracy on DVD! 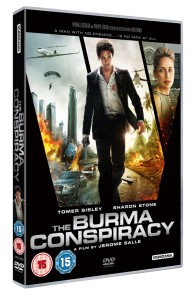 We’ve got 3 copies of Bourne/Bond style espionage flick The Burma Conspiracy to give away! All you have to do to enter is retweet our competition link on Twitter or tag the competition on Facebook.

Winners will be announced on Wednesday 1st of February!

The Burma Conspiracy Synopsis: Following the murder of his adoptive father Nerio, Largo Winch (Tomer Sisley) is now CEO of the vast W Group. But the compromises money and power require don’t suit Largo. He announces the sale of the Group and the creation of a humanitarian foundation, to be led by his father’s oldest friend.

The very day the agreement is signed Largo is accused of complicity in crimes against humanity. International prosecutor Diane Franken (Sharon Stone) suspects him of having paid off – four years previously, for his father’s benefit – notorious Burmese General Kyaw Min, after the displacement of a mineral-rich native village on behalf of the W Group turned into a massacre. And she has a witness.

One response to “Win The Burma Conspiracy on DVD!”