In Review: A Dangerous Method

A Dangerous Method, based on the book by John Kerr, focuses on the fragile friendship and exchange of ideas between psychoanalysis legends Sigmund Freud (Viggo Mortensen) and Carl Jung (Michael Fassbender), which began in the first few years of the 20th century. Also central to the story is Sabina Spielrein (Keira Knightley), a Russian patient of Jung’s, whom he treated using the talking method proposed by Freud. Being a story containing Freud, it is no surprise that the issue most discussed is sex and our reactions to it.

Spielrein becomes a patient of Jung’s in Zurich, having been admitted to the hospital by her family. She was diagnosed as hysterical, a plight no doubt shared by many young women of that time, kept in ignorance about her own development and sex in general. As the story progresses, we see Spielrein responding positively to her treatment, so much so that she decides to start studying psychoanalysis herself. Another psychoanalyst, Otto Gross (Vincent Cassel), appears in Zurich to be treated but succeeds in making Jung uneasy about his ideas. Jung and Spielrein then start an affair.

In the years that follow, Freud, Jung and Spielman become inextricably linked and influence each other in ways which they could not have predicted.

David Cronenberg has directed a very well paced and measured attempt to illuminate the complicated relationship between three very interesting people who were pioneers of their field. It could have been a very dark effort, considering all the dreams and ‘base’ animal instincts being discussed but it was just intense, with dark moments. The film sets/locations are very pretty but the film doesn’t rely too heavily on this to provide interest, as too many period dramas have in the past.

All three actors give good accounts of themselves, although, at times I did find myself very distracted by Keira Knightley’s gurning and attempt at a Russian accent. I also felt that I had seen enough of her attributes to last me a lifetime: you may take that as a recommendation if you wish. There is no repeat of Fassbender’s previous naked antics but he does sport a very nice moustache by way of compensation. He is still very much the star of the moment, dominating each frame with a sort of quiet determination.

Viggo Mortensen and Michael Fassbender were very believable as teacher and student; Fassbender portraying well the frustration which Jung must have felt at Freud’s inability to get past the negative, sex-obsessed focus of his work. Mortensen, in turn, adequately conveys his disappointment at Jung’s insistence in dragging other areas of focus into psychoanalysis. Vincent Cassel plays the role of the joker very entertainingly, flabbergasting us all with his self-assurance and refusal to repent. Knightley is compelling as Spielman during the scenes in which she discusses analysis and argues with Jung but not so much at other times.

The film is a good mix of discussion, scandal and intrigue and should whet your appetite for analysis even if it doesn’t go as deep into its dark ideas as we might have hoped. Even so, it was a very entertaining 99 minutes. 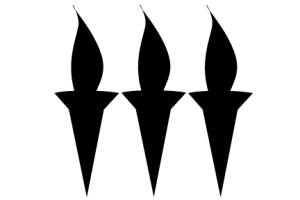 Maryann has awarded A Dangerous Method three Torches of Truth